(This post should have posted July 15th, because we couldn't find any wifi or cell service in the Grand Canyon. I couldn't even cancel meetings or let people know. It was great.)

Today we drove from Cedar City to the Grand Canyon! Just so that we could experience the cliche of the great American family road trip. But first, we had to actually get on the road, and two things didn't go so well.

In my defense, I was just trying to be helpful. So, so, helpful.

(Also in my defense, I should mention that because of some laundry and some writing, I only got about four hours of sleep last night. That might explain some of my issues.)

So, before we got on the road, I wanted to fix the driver's side mirror, which had come really loose on the drive, and wiggled around. I did a Wal-mart run last night, and bought a hex tool set, so I could tighten the bolt holding the mirror in place. And in the morning, after we slid in the sides of the RV, but before we set out, I got out the tool, rolled down the window, and adjusted the mirror to the right view. I got out and tightened the mirror bolt, so that Courtney and I could see the cars in the next lane. Because RVs are so big, those mirrors are super important. So see, I was being helpful.

I also decided that it would be really helpful to clean off the front of the RV, because we had hit a *lot* of bugs on the trip. The whole front of the RV is just a massive entomological graveyard. So, after unhooking the water from the RV, I took the hose, turned on the spray, and started spraying down the front of the RV. I sprayed the top overhang, and the front windshield and I sprayed the side mirror, which had so many bugs. I kept spraying that mirror, until I started hearing my kids yell at me, from inside the RV. I could hear them so well, because the driver's window was completely open, and I was apparently hosing down the driver's seat, full stream. The spray got as far back as the couch. So, we started our little trip with a fully soaked driver's seat.

The worst part is, that because I was going on so little sleep, Courtney said that she would drive the first shift to the Grand Canyon. Because I had hosed the driver's seat, I said that I would drive, but she decided that the sleep-deprived fool that would spray a hose into an RV probably shouldn't be driving said RV.

The second thing that happened on the drive was that the front panel screen wouldn't come on. It operates the rear view camera, which we keep on all the time to see cars approaching on the highway. I worried a little that we had tripped a breaker somewhere. The rearview camera is not essential, but I started playing around, and found that the tank gauges (grey water, fresh water, etc.) were also not working, nor any of the outlets. Then I started to get worried, because I didn't know if we could stay in the RV that didn't have any tank gauges, or if the AC would work when we got to the next camp site. I was just about to have Courtney turn around to an RV repair place we had passed in the last town, when I remembered that I had hit an errant switch last night, as I was coming in late from the laundry adventure. I had thought at the time that it was accidentally the awning control, right at the entrance, but then I got up and checked it, and it was a battery disconnect switch. I only had to flip that, and everything started working great.

We ended up getting into the Grand Canyon RV park around 4:30 pm, and heading over to see the rim, and to visit the visitor's center. This was the first time we stayed in an actual National Park campground, but it was pretty great, being close to the action.

Because it is our anniversary today, the kids cooked dinner for Courtney and me, in the RV. We had buttered bread, vegetables and dip, and pasta with marinara sauce. It was delicious, and I can't think of a better way to celebrate our anniversary than to have my kids feed me, and to have my wife drive me to the Grand Canyon sitting in a soaked driver's seat. Love you, honey! Here's to many more adventures together! 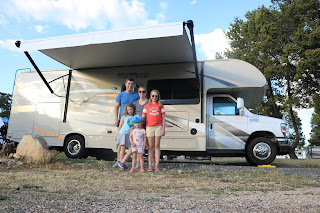 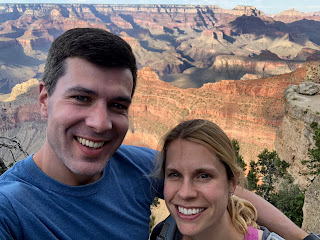 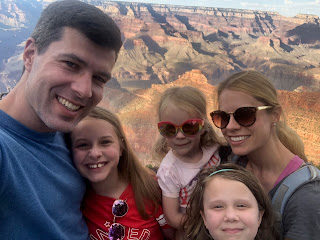