Today we completed our second day of RV-ing! Just a short hop from Goodland, Kansas, to Golden, Colorado. Get us some socks for our sandals, because we are (almost) RV pros. 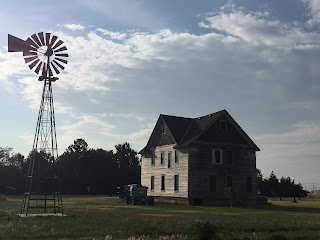 We woke up at the Goodland KOA, which was just what we needed, a place to park near the interstate, with full hookups, for about 12 hours. At the KOA there was a playground, where we burned off some extra energy before we got in the car for the drive. (There was a newish-looking slide and swing set, and a merry-go-round from the 1970's that looked like it was built with repurposed farm equipment. What did my seven-year old choose to play on? The merry-go-round. No doubt hoping to fling a sister off it at high speed.)

Because we switched over to mountain time, we were actually up a little early, and on the road by nine. When we saw that we would be at our Golden, Colorado spot too early to check in, we decided to stop at Taco Bell to eat lunch. I love Taco Bell, and I have missed it so much since being out of the country. So I had hoped that my kids would love Taco Bell, also, but I was not so lucky. They thought the burrito had too much cheese. They thought the quesadilla was too spicy. They thought the cheese dip was too hot. What do they know? They are just dumb kids. (Not really. They are super smart. But they are way wrong about Taco Bell.)

When we arrived in Golden, we had dinner with some wonderful family friends from Arkansas, who now live in Colorado. We ate burgers at the picnic table beside the RV while listening to the Clear Creek burble behind us. It was wonderful. Good friends, good food, and carrying your whole house around with you like a hermit crab. This is the life.